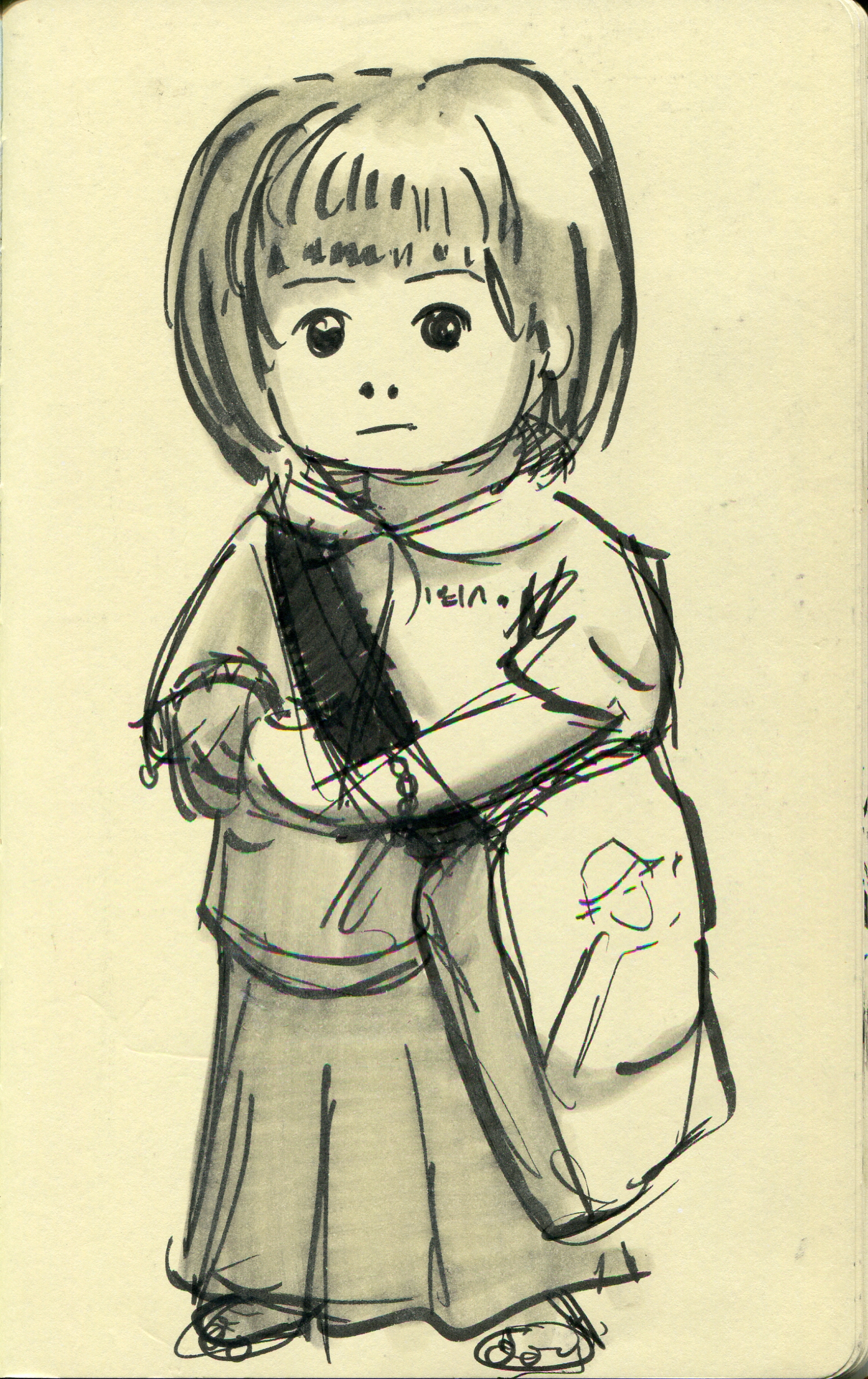 Back in October, Olwen and I went on a two-week medical mission trip to Cambodia.  We held a half-dozen clinics in the towns of Barai and Battambang providing medical, dental, and optometry care with each clinic seeing around 200-300 patients a day.  Obviously I don’t have a medical background, but I worked in intake preparing the patients for their appointments and taking their blood pressure.  Olwen worked in the Children’s Ministry where they taught the local children various songs, crafts, hula dance, and a skit of Daniel in the lions den.  During the course of the trip, I brought a blank moleskine with me and documented some of what I saw while I was over there.  This was my first ever mission trip and my first time traveling to Southeast Asia. Here are a couple highlights from my sketchbook with more drawings after the jump.

Thursday (10/18): View from behind the Solar Cafe during lunch.

Our first day of clinic was held in a little town called Barai.  We stayed at the Khmer Homestay which was operated by Pastor Esther and Pastor Lily as a place for mission workers to experience a glimpse of what it’s like to live in a Khmer setting.  Basically, it was hot, humid, and surprisingly noisy as a Buddhist temple was blaring loud music out of a speaker next door to ward off evil spirits.

Monday (10/15): Kids watching us unpack from a window overlooking the homestay.

We held three clinics during our stay in Barai: one at a local church which was nothing more than an empty wooden building and two right at the homestay.  Here were a couple of scenes from our first day of clinic.

Tuesday (10/16): Pharmacy trying to finish up the backlog from the day inside medical office. Patients wait for their prescriptions at the door.

Tuesday (10/16): Kids playing on swing set behind the intake tables.

Tuesday (10/16): There were a lot of bugs out tonight. This tree was along the way to our treehouse. The number of flies buzzing underneath the lamp was typical for all lights that evening.

On the last night of our stay, we held a praise and worship night for the local church’s youth groups and even had a bonfire in the grounds, introducing them to good ol’ American s’mores.

Wednesday (10/17): Everyone saying goodbye after a night of worship and sharing smores with the youth.

The next day, we held a half day of clinic before making the 6-hour drive to Battambang.

Thursday (10/18): Bathroom break on the way to Battambang. Hung warned me that to use the bathroom would cost 500 riel. I asked him how much was that in USD. It was 10 cents. I pay $2 for everyone to use the bathroom. As they wait in line, Evan describes to Adrian the plot line for Star Wars Episode 7.

After arriving in Battambang, we had a day off.  Some of us decided to visit the Killing Caves.  During the Khmer Rouge regime, these caverns located up in the hills were used as a place to interrogate and execute any locals and their families the Khmer Rouge suspected were against their cause.  These caverns would see so many executions that some victims were able to survive because there would be bodies of other victims to break their fall.

Friday (10/19): Brick arch located on the path to the Killing Caves. The weather is hotter and the path is more difficult than anticipated.

Friday (10/19): View from within one of the Killing Caves. The translator explains how a woman was thrown into this cave to die, but survived by landing on several bodies. She would later escape by climbing out of the cave and living in the jungle for 6 months.

On Sunday, we went to a local home church for worship service.  Despite the lack of AC, lights, audio equipment, and pamphlets, this was probably one of the most uplifting services I had the pleasure of experiencing.  The passion with which the locals sang and danced was something I hadn’t experienced much in the States.

Sunday (10/21): Arrival at the house church before service.

Later that day, we visited Yachiyo, one of our church’s missionaries, at her school where she taught English.  A few years ago, she was in the States hoping to live the American dream as a recently immigrated Japanese national.  During a mission trip to Cambodia, she heard God’s calling to move there and minister there without knowing what she would be doing.  Eventually, she ended up finding a position as an English teacher, a position that she was at first very hesitant to take.  Since then she’s been teaching and loving her Cambodian students.  When we came to visit, she had our pastors share with her students who were going to be baptized later that day.

The baptisms were held at a local water park.  Keep in mind that this was no American water park but it did have a few water slides and given the heat and humidity, anything resembling a pool of semi-chlorinated water is luxury.  Overall, thirty kids were baptized by our pastors and elder.

The next day, we were back in the saddle with another clinic.  For this particular day, our children’s team was not allowed to hold their activities due to a government restriction in honor of the king’s father passing away the week we arrived in Cambodia.  I got switched over from intake and had the pleasure of participating on the prayer team.  On this particular day, we saw over 200 people accept Jesus into their hearts.  Prior to this trip I had enough trouble sharing the Gospel just once!

Monday (10/22): Steven gives his paper airplane demonstration in front of a group of kids during clinic. Mary helps with translation.

After most days of clinic, we would have a debrief meeting usually held in one of the hotel rooms.  One thing I forgot to mention is that our team consisted of 29 people from the States and 8 from North Vietnam, so there would be nearly 40 people packed into one hotel room on some nights.

Our last couple of clinic days were held over at Yachiyo’s school for the students, the staff, and their families. Here are a couple of action shots of some of our American dentists. One of the hardest things was to hear the squealing from the kids during their tooth extractions.  Overall, I didn’t hear any screaming at all from any of the adults during their procedures.  My guess is that they probably have a high tolerance for pain.  But for these kids, there’s something a little disheartening to have 7-8 year-olds getting their teeth removed.

The children’s team was back on schedule at the school clinics.  They got to visit several of the classrooms to sing, make crafts, play games, and even teach them how to hula!

Wednesday (10/24): Teaching kids how to hula dance. From left to right: Olwen, Ann, and Saroun.

Wednesday (10/24): A young student waiting outside a classroom. I tried my best to make her smile, but she wasn’t having any.

Another Cambodian ministry our church supports is Sunbeam Kids International started by Jerry and Wilma Mishler.  They were around retiring age ready to settle down when they heard God’s call to go to Cambodia.  We had a chance to visit the Sunbeam Orphanage which they help operate.  Even though the kids had never met us before, they jumped and climbed all over us without any reservation.  A lot of these children were abandoned and some even thrown away.  Thanks to the Mishlers, they at least have a safe haven with people to care for them.

Wednesday (10/24): Olwen playing with two kids with balloons at the Sunbeam Kids Orphanage.

We took off for Phnom Penh, Cambodia’s capital, and spent our last day doing some shopping at the markets.  When we first arrived in Phnom Penh at the beginning of our trip, there was hardly anyone on the street since there was also a holiday on top of the former king’s passing.  Arriving back in the city, Phnom Penh was unrecognizable.  There would be mopeds, “tuk-tuk’s” (moped-pulled carriages), buses, cars, bicycles, even pedestrians all in the same street.  To my amazement, I didn’t witness any accidents, but to the locals, it’s probably business as usual.

At the end of the day, we headed towards the airport where we were met by some of our translators to say a last goodbye.

Thursday (10/25): At the airport saying goodbye to our translators.

Thursday (10/25): Pastor Joe listens to a man describing his plight at the airport as he waited for papers to allow him to return to America. The man described being stuck in Cambodia for 4 months after being harassed by a stranger in a previous encounter. He finally got the papers to fly home.

The last page of my sketchbook ended up being a sketch of Yachiyo, which seems like a fitting end to the journal.

Thursday (10/25): Portrait of Yachiyo right before we check-in. Goodbye, Cambodia.

Overall, it was a profound trip for me during these two weeks.  Even now, I feel like I’m still processing what I experienced on the trip.  When I first signed up for the trip, there was a little apprehension about visiting a developing nation and dealing with the humid climate.  After this experience, I can say it’s my most memorable and rewarding trip that I would take over any vacation.  While we were able to provide some help to the Cambodians, I felt like they taught me more than anything I could have helped.  As a result, I feel an increased boldness to live out the Gospel.  Although this is primarily an art site, I feel like sharing this helps to understand the inspiration behind my work since my art is an extension of myself. Whether you consider you may or may not care for sharing my faith, I appreciate you taking the time to read through this.