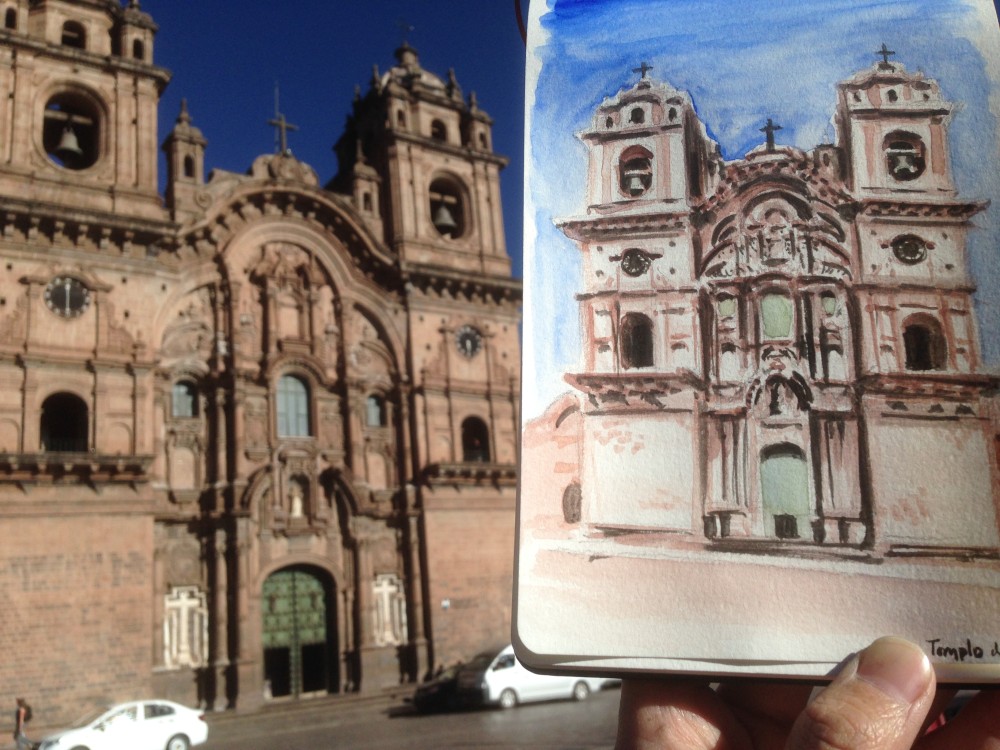 We wanted to spend some time at the Plaza de Armas mostly to people watch and to do some sketching.  I planted myself in front of the Templo de la Compania de Jesus with my watercolors while Olwen found a bench closer to the center.  I never done much watercolors recently, and the result turned out a little rustier than what I wanted. I admit that I was a bit overwhelmed with the details of the temple, but I think the exercise gave me a greater appreciation for the colonial architecture.

A comp with the real thing. I can’t do it justice.

There’s another thing that I would like to bring up for those traveling to Cusco.  This may sound a little uninformed and naive, but based on my time in Cusco, there doesn’t seem to be much industry outside of tourism.  Macchu Picchu brings in a lot of wealthy travelers from around the world, and I feel that Cusconians have adapted their economy to get as a big of slice of that tourism pie.  It’s not necessarily a bad thing as the Cusconians are supplying a demand for an exotic Peruvian experience, but it does become overwhelming at times when you literally can’t be left alone for five minutes without someone selling you something.  Most of the lower-end souvenir shops we walked into sell the same merchandise, and we’ve been warned that some of the goods like alpaca wool can be suspect.  A lot of restaurants can survive on the tourist walk-ins instead of the merit of their food.  It’s not like a city like Tokyo, Phnom Penh, or even Portland where you can sample the flavors of the local culture just by being an observer among the locals.  In Cusco, it felt like the locals were the observers and the tourists were the norm crowd. There was a pervasive feeling of artificiality as if everything around me was trying to reach for my wallet.  Even some of the locals who dress in traditional Peruvian clothes do so for the chance to charge for the photo ops.  I would also imagine that a lot of New Yorkers probably avoid Times Square for the same reasons.  I get that the city isn’t the most wealthiest, and there were many areas with slum-like conditions that we walked through.  I’m not making any kind of judgment with the tourism-based way of life in Cusco, but I do hope to temper any expectations that anyone would have about anyone traveling to Cusco looking for an “authentic” Peruvian experience.  We came to Cusco to be tourists, and we will get the tourist experience.  This is the Cusco way of life now.

As I was wrapping up my sketch materials, I began to take notice of some distant drumming and flutes that had gotten progressively louder.  When I looked up from my sketchbook, I found myself in front of a few dozen children dancing in formation.  Every child wore a rimmed hat with the girls wearing black skirts while holding a shaker.  I had been listening to the music earlier and thought that it was a local band playing in the background; I then gathered that these kids had been marching and dancing around the whole plaza.  Several of the kids seemed pretty focused on their performances with steely gazes and furrowed brows… either that or they were getting tired of marching around the plaza underneath the hot sun.

There’s literally an army of children dancing in front of me.

If there’s one thing that I enjoy when I travel anywhere, it’s visiting the local markets.  I love the sights, smells, the hustle and bustle among vendors and customers.  Even though Pike’s Market in Seattle is a big tourist draw, I still feel like it still retains a lot of the character that makes Seattle unique.  The Mercado Central de San Pedro is the largest farmers market in Cusco and is a popular destination for tourists.  The building that houses the market is enormous and quite run down, but inside were numerous wooden stalls painted white which housed everything from food and drink vendors, cocoa, flowers, produce, and meat, to handbags, tailors, and statuettes.  The most alarming sight was probably the meat market with slabs of pork, whole chickens, and pig carcasses all sitting out in the open without refrigeration or protection from the flies.  Overall, I would highly recommend this place for any traveling passing through Cusco.

On our way to the market.

A shop sells grains in the market.

A woman peddles her flowers at the Mercado Central de San Pedro.

We grabbed dinner at a chifa restaurant near the Plaza de San Francisco.  “Chifa” is a local term used to describe Peruvian-Chinese cooking.  A lot of Chinese migrated to Peru in the 19th and 20th centuries and brought with them their cooking techniques and ingredients which melded with the local cuisine.   One dish called “chaufa” is literally fried rice which is “chow fahn” in Cantonese.  I was looking forward to trying out a few places in Cusco, but to my disappointment, the couple of chifa restaurants we walked in this part of Peru were subpar including the one we ate at this night which gave me an upset stomach.  I do hear that the places to try out were in Lima, unfortunately, we weren’t afforded the time to explore Lima outside the airport.

Even though the weather was sunny and warm during the day, the temperature begins to drop as soon as the sun goes down.  Being in the southern hemisphere, the city was nearing its winter solstice opposite of what we were experiencing back home in Seattle.  We spent the waning hours of the evening at the Plaza de San Francisco where I sketched the nearby cathedral.  After I finished, we headed back to the hotel to prepare for our long trip to Aguas Calientes.

A comp with the Templo de San Francisco de Asis.