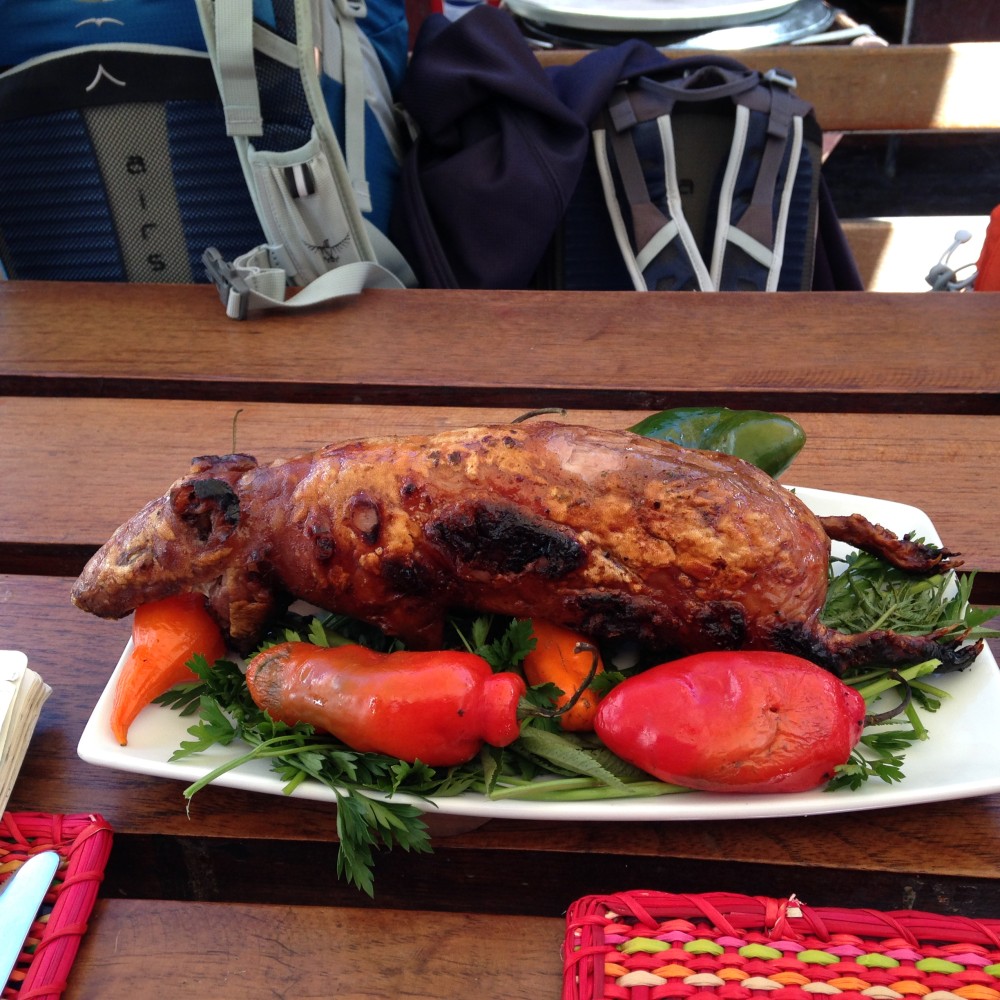 We had another half of day in Cusco before we had to catch a bus out to the Ollantaytambo station to catch a train to Aguas Calientes. But before I go into that, let me introduce you to one of Peru’s most exquisite delicacies: cuy!  What is “cuy” you may ask?  Why it’s the name given by the locals to one of natures most delicious, nutritious, and downright adorable creatures: the humble GUINEA PIG.

That’s right, folks! The name “cuy” is a local onomatopoeia based on the squeaking sounds of the guinea pigs.  These little critters are a good source of protein and are raised in farms all over Peru.  They tend to be a tourist draw as I noticed a lot of restaurants in the area offering it on their menus.  A roasted cuy can take nearly an hour to prepare, so we made a lunch reservation at a spot near our hostel called PachaPapa and wandered around town as we waited.

When we returned we were immediately ushered into the main dining area which sat in the middle of a courtyard.  Situated prominently in front of all the tables was a large wood fire oven from which we were served some tasty bread rolls served with a couple dipping salsas. After a few minutes our server told us that the cuy was “ready for picture” to which we nodded politely but didn’t quite understand what he meant.

Waiting for our “cuy” (guinea pig) at PachaPapa.

Here’s where the roasted our crispy cuy.

Then they brought out the cuy. Holy moly…

Our roasted rodent is ready to eat!

The one thing that jumped out to me about the cuy was how BIG it was; I’ve seen house cats that weren’t as large.   This one was about the size of FIVE guinea pigs that you would find at the pet store.  Also, it barely resembled a guinea pig without its fur and looked more like a scorched rat.

I then realized that the servers were going to cut up the cuy for us to eat and had brought out the whole cuy for us to take pictures.  They took the cuy away and brought it back all chopped up with a side of potatoes similar to what a Chinese butcher would do with a roast duck.  In fact, the taste of cuy reminded me a lot of Peking duck with its crispy skin and oily meat; it wasn’t half bad!

We noticed the other tables curiously gawking at us as we munched on our former furry friend.  We didn’t getting our hands messy as we gnawed and sucked the bones dry, I mean, we’re Chinese, and I’ve eaten stranger stuff! One woman had walked up to us with a camera and was filming us like we were some exhibit at a zoo.  We then offered her a taste of the cuy. At first she was reluctant, but she was finally goaded by her family sitting at another table and tried it out.  To her surprise, it tasted well… like… chicken!  With our bellies filled with cuy, we set out to catch our bus to Ollantaytambo.

Here’s another note to any would-be travelers to Macchu Picchu.  There are a couple means of transportation to Ollantaytambo.  One is to take a taxi and the other is to take the bus which is more like a large van.  The buses are generally cheaper, but they only leave when they are filled up.  We opted to try out the bus for the lower price, but we ended up sitting in the van for nearly an hour almost to the point where we might miss our train.  Fortunately, a taxi driver offered to take us there but at a higher price, but we found a French couple arriving at the bus and persuaded them to join our ride.  We were about an hour and a half away when we departed Cusco, so our driver had to book it.

On the way to the train station in Ollantaytambo.

Along the way, the countryside in Cusco was picture perfect. The skies were blue, the clouds fluffy and white, the mountains majestic. We passed by the Sacred Valley of the Incas right before we reached Ollantaytambo, and with the sunset rays receding past the mountains, it was deserving of its title.

The Sacred Valley of the Incas or the Urubamba Valley.

We only managed to lose a pair of sunglasses during the mad dash towards the train, but we made it!  Our seats were waiting at the rear in a packed car.  It would be another hour before we would reach Aguas Calientes.  On the way, I started sketching some of the surrounding passengers including a couple of ladies sitting across from us.  Eventually they took notice and began to have a conversation with me in my broken Spanish.

One of my subjects requested sketch for her to keep.

Making new friends on the ride to Aguas Calientes

Sketching my sleeping neighbors on the train car.

Sketches of my fellow passengers.

When we reached Aguas Calientes, it was already dark.  By being so close to the equator, our days were around 12 hours long with sunrise and sunset times staying consistent throughout the year with little variance.  The following morning, we needed to wake up early, so our evening was going to be pretty short. We grabbed a quick dinner, bought some snacks at the local convenience store for the next day’s hike, and called it a night. Macchu Picchu awaits!

Peru, Day 3: Cuy and the Journey to Aguas Calientes