Here’s a little work in progress for a story I’ve been working on. I won’t reveal the plot just yet, but let’s just say it has to do with a gorilla and a picnic. Below is an art test that I made for the gorilla. Right now, I’m also putting together a dummy book as a rough draft, and eventually moving on to more developed art. There will be more updates coming up in the next few months, but in the meantime, enjoy this little preview of things to come. 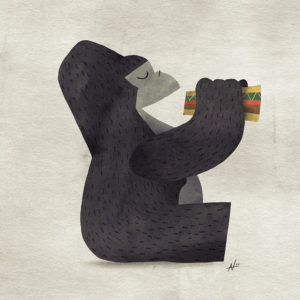 Spent a good part of the afternoon hanging out with the Higashi boys sketching at Woodland Park Zoo.  It was pretty awesome weather which we haven’t seen for a while.  The rest of Seattle noticed as well and decided to pack the zoo to the rim.  I hadn’t done animal drawings for a little while so there was a little rust that I needed to shake off.  One of these days, I’m going to get something out of these brush pens!  Nate, Josh, and Andrew had a really great time and were loving the sketching even though drawing live animals is one of the hardest things to do.  We even got a lot of compliments from strangers about our sketches!

Later that day, Olwen and I got to swing by the UW campus to get a glimpse of the cherry blossoms in the quad before grabbing dinner and heading out to the Holy Saturday service over at Blessed Sacrament.  Other than a funeral, this was my first vigil, which ended up being, as my friend Lawrence who invited us described, the “mother of all vigils.”  I probably didn’t get all the etiquette involved with a Catholic service, but it was quite a spectacle to witness. Despite the three-hour duration, I could sense the joy behind all of the singing, readings, and prayer and how every article and gesture seemed to have a purpose behind it.

Cherry blossoms in the UW quad