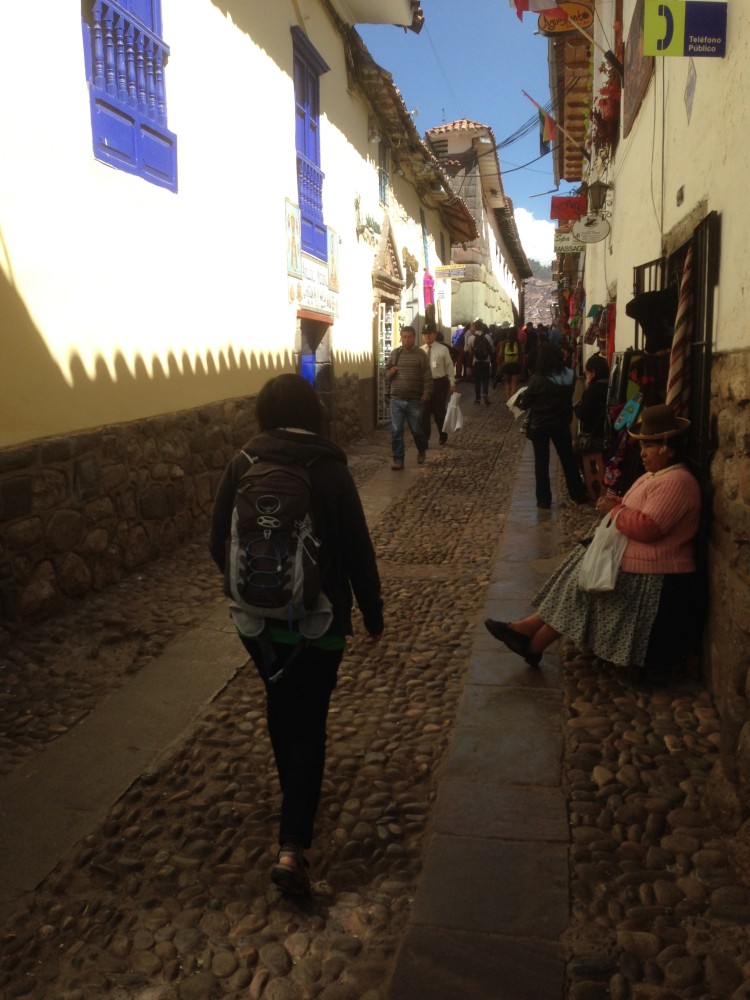 In order to get to ruins, we needed to first fly to Cusco, the former Incan capital of Peru. The town of about over half of Seattle’s population is at a crazy high elevation of nearly 2 miles above sea level, double the elevation of Denver! Pretty much every travel guide had a warning about altitude sickness when you first arrive at Cusco.

My first impression of Cusco reminded me a lot of my visit to Cambodia a couple years ago minus the heat and the humidity.  Short buildings intermingled with shacks while the smell of diesel hung in the air. Traffic wasn’t as chaotic as there were officers and traffic lights managing the intersections. The weather was warm during the day but quickly cooled off when the sun went down.  The streets were extremely narrow with even skinnier sidewalks which required you to be aware of your surroundings as you only had a couple feet separating you from passing cars. A couple hours after landing, we began to experience the light-headedness and fatigue associated with the new altitude.

One of the many stairways in Cusco.

There’s one thing I want to note to anyone who plans to travel to South America, and that is to make sure to bring the most pristine $20 bills you can get your hands on. Any money exchanger in Peru will reject anything other than a crisp $20 bill. If there’s so much as a nick in the bill, it’s worthless; my (uneducated) guess is that it has something to do with counterfeit bills. Unfortunately I didn’t discover that until after we arrived and ended up carrying about $100 worth of useless bills for the rest of the trip.  I definitely got pretty suspicious whenever someone bumped me.

We arrived at ¡Pantastico!, a small bakery/hostel located in the San Blas district. It was a tiny place accessible through a tiny door located along a tiny alley with small rooms, creaky floors, and a welcoming cozy atmosphere. The staff were hospitable the moment we arrived and offered a cup of coca tea typically given to travelers to adjust to the altitude. After dropping off our bags we set off to find a walking tour at the Plaza Regocijo, one of the many plazas scattered around the Cusco where most of the tourist activity congregates, the most prominent being the famous Plaza de Armas.

Close up of an ancient Incan wall.

When we planned our itinerary, we knew we were going to have some trouble adjusting to the altitude, so we wanted to do something easy, a nice stroll through the city while taking in a slice of life in Cusco. Actually, it ended up being like one of those cartoons where the Donald Duck cuts out a slice of cake for himself and proceeds to take the rest of the cake leaving the slice behind. At first it was a nice stroll, but then there were stairs, and more stairs, and LOTS of stairs. Our concept of relaxing didn’t involve heavy breathing and being drenched in sweat. It probably wasn’t that much had we stayed a couple nights before the tour, but it was a bit more than we bargained for. If you want to take it easy on the first day, I’d recommend the walking tour the day after you arrive to give yourself time to acclimate.

Walking through the San Blas district.

Eventually, the altitude got the best of Olwen and we decided to take it easy for the rest of the day. I went downstairs to do some sketching and got to hang out with one of the staff, Victor, and a relative of one of the owners, Dana. This gave me an opportunity to brush up on my Spanish which the last time I checked, I hadn’t used since the last millennium, literally. It’s amazing though how quickly it comes back after a couple days’ practice, and even though I wasn’t fluent by the end of the trip, I did have a firmer grasp on it than my Cantonese. (I can just hear the disappointment from in-laws…)  Olwen eventually woke up, and we grabbed a light dinner at a vegan restaurant across the street before calling it a night.

Victor managed the hostel in the evenings.

Dana, a relative of the owners poses with her sketch.

Going through the San Blas District.