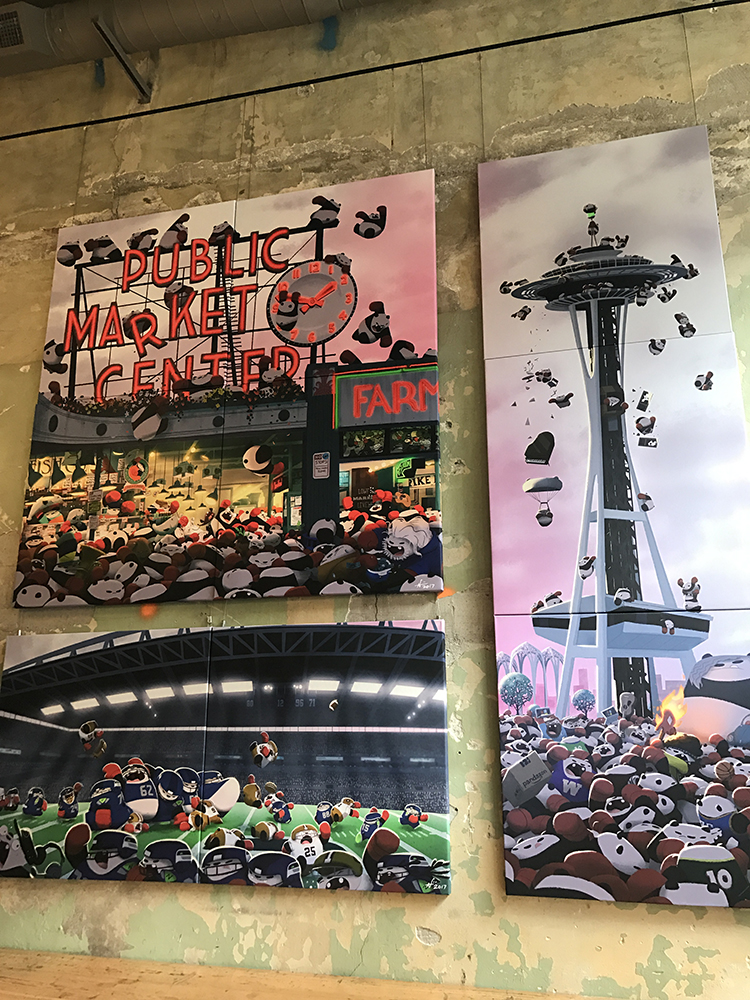 In August, Eastern Cafe approached me to exhibit a piece in their cafe located in Chinatown. They had a big wall with high ceilings and were looking for a large piece to be featured on it. Ken, the art curator, suggested I could use the Pandamonium piece I did over a year ago or make a new piece entirely. I hadn’t gotten around to prepping the Urban Brawl piece for a canvas, but I also wanted to make something new.

I thought it would be nuts having to make another Pandamonium-style piece during the holidays, and I had to spend a few all-nighters trying to finish the last one. But I hadn’t worked on a piece that big before, and it seemed like a good opportunity to try something new. Maybe, I thought, I could make something simple that will look cool without putting me in the hospital. So I said yes, and Ken booked me from January to April, which meant that I had about four months, plenty of time to come up with a piece. So I thought.

Again, my original idea was to keep things simple. Here’s how the rest of the dialog in my head went…

So if I was going to make another Pandamonium, I’d have to be able to finish it by the deadline. Earlier in the year, I sketched out a panorama of Pike Place Market filled with pandas, but it would’ve taken too much time to figure out all of the angles and perspective. Here is the rough sketch I made of the panorama.

Again, I debated about what I was going to draw…

So now I was doing THREE Pandamoniums, I guess it’s go big or go home. If I was going to finish these, I better plan it out better than the last two. I batted around with a couple of sketches and decided to base the pieces on Seattle landmarks. My wife proposed a cool layout that I eventually used. Lately, I’ve been trying to simplify my work, so I went with a simple camera positions and kept the compositions looking flat and simple (Pfffff, yeah I tried).

For a while I was debating between working in Photoshop versus Illustrator. At first, I wanted to do Illustrator because of the size of the final image, and vector graphics would retain their fidelity regardless of the final print size. But it was hard to make an image look organic in Illustrator, and I haven’t worked with it long enough to know all the tips and tricks. On the other hand, working in Photoshop for a painting that size could take a while, the file size of one of those pieces would eat up my hard drive space. In the end, I decided to stick with Photoshop since I felt more comfortable with it and figure out the rest later. Below are the rough sketches and a color key.

Here, I made a mockup of the color key using a reference photo I took when I visited the cafe. It helped to get an idea of how the piece would fit into the space. In this photo, I was originally planning it to be a 12′ square but later sized it down to 9′.

One of issues I had with drawing large crowds of pandas was that it would take so much time to draw them individually. In order to build the crowds faster, I resorted to drawing individual pandas separately, and then copying and pasting them into the larger pieces. Sure it’s cheating, but if I arrange and scatter the pandas randomly, it would be hard to notice any similarities unless you look really hard. Occasionally, I would do touch up a couple of areas to add more variety to the piece.

In order to keep the colors consistent for each piece, I made sure that I used the same adjustment layers on the final pass for each piece. I also made sure to paint with the same swatches across all three paintings. You can see a sample of the swatches I used below.

Along the way, I discovered that Photoshop had a new file format called a PSB, which is their large document format. PSDs have a maximum limit of 30,000 x 30,000 pixels which wouldn’t be large enough for my pieces. My files got so big (the largest file size was over 15 GB) that it would take so much time just to save. Before I flattened my files, I would wait until the end of the day to save my work because it would take all night for it to finish. Eventually I learned a few tricks to reduce the saving time like turning off all of the layers before I saved which really decreased my saving time.

After a month of staying up late til 4 in the morning, I was finally able to send the files to the printer. Overall I’m pretty happy with how the pieces turned out, and it’s surprising that I was able to make these with my laptop. My Macbook managed to make it to the finish line, but boy did it take a lickin’.

And here is the final product, Pandamonium: Battle in Seattle…

I had the art broken into 3′ square panels so that I can transport them in my car. The only panel that isn’t a square panel is the middle panel of the Space Needle which needed an extra 4″ to compensate for the gutter between the other two pieces. The art was printed and stretched on to canvas by Bellevue Fine Art.

To be honest, I was surprised how big it was. It actually doesn’t feel like it was something I made even after it was hung up. I guess I’ve never seen my art on a wall that big before, but I can get used it.

Big thanks to my wife for the initial layout, to Scott and the crew at Bellevue Fine Art for the fantastic prints, and to Ken for the invitation and for helping me hang up the work. Below are some progress shots for each piece.

I’ll be debuting the prints for these at this year’s Emerald City Comicon on the first weekend of March. I’ll also be opening up commissions for ECCC in another post shortly. If you’re interested in larger canvas prints like the one I just hung up, feel free to shoot me an email.

Anyways, thanks for reading! If you have any questions about my process or about the piece, feel free to comment below or send me an email. Until then, have a great week! 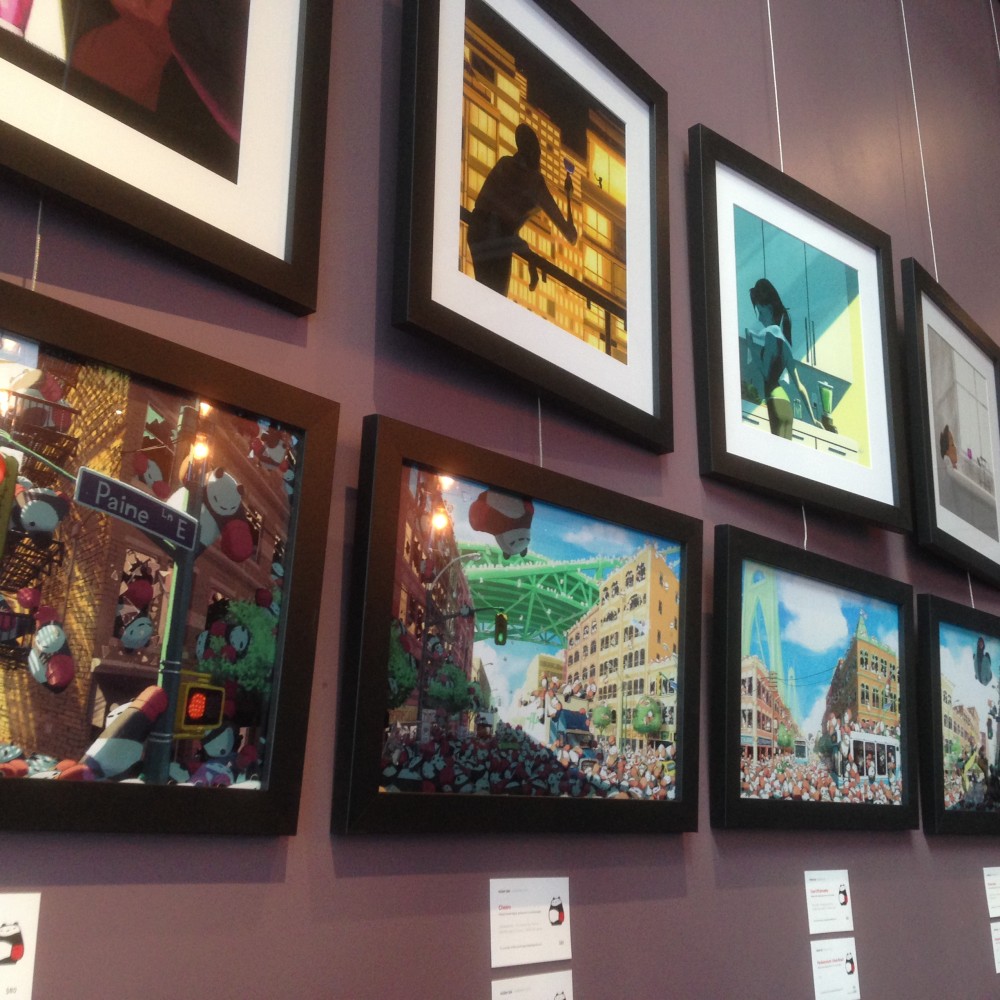 Hey everybody! Just want to let you all know that I am displaying my art at Cafe Cesura for the month of June. Come swing by, grab a coffee, and enjoy (cough… cough… BUY) some art! Cheers!